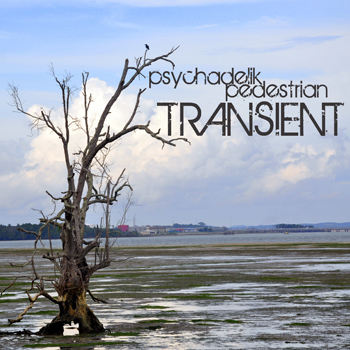 Psychadelik Pedestrian's second album features a blend of brand new tracks and some of the best Psychadelik Pedestrian tracks since his self-titled first album in 2008. The album starts with the slightly eerie pads of Spectre, a new downtempo instrumental track, before raising the tempo with Upside Down, Psychadelik Pedestrian's summer 2011 track incorporating a stunning vocal from Snowflake.
The next track, a dubstep remix of Tears In My Heart, tones down the tempo but adds epic synth pads and wobbling basslines. A newly remastered version of Twist Turn Slide follows, pumping it up a notch; originally released back in 2005, this track features intricate electronic breaks spliced with a deep, infectious bassline. The Black Moon remix of Cry Over You is next; adding beautiful haunting vocals from Suzi Q. Smith to the original, this new dubstep mix combines a huge, throbbing bassline with downtempo beats and melanchonic strings. The brand new track Restroom follows, building with lush pads and a spoken vocal from Snowflake, and breaking down with a half-tempo beat with overlaid drum 'n' bass breaks.
World Of Fantasy is the next track and speeds up proceedings and delivers tight breaks, pumping basslines and old skool synths. Two downtempo tracks follow starting with Druid's March, and atompsheric track with a driving rhythm and piano riffs which is followed by Coral Reef, a relaxed, thoughtful piece with a melancholy feel, featuring warm synth pads and slow, tribal rhythms. Closing the album is a new mix of Solidarity, which starts out with slow dubstep rhythms and pads, and builds to an acidic TB-303 style breakdown with driving breaks. All tracks are available to download for free in full length, high quality MP3 format, and available for non-commercial use under a Creative Commons licence.
Release picture by Eustaquio Santimano and used under a Creative Commons licence: http://www.flickr.com/photos/eustaquio/5338964484/.
Vocal tracks courtesy of CCMixter.

Reviewer: sacsayhuaman - favoritefavoritefavoritefavoritefavorite - April 15, 2014
Subject: Psychadelic clinic clean
Hi there, folks..
perhaps it's not to be expected to be, but..
During the last an hour I did clean bathroom, wearing nice rubber gloves. Stink from the bleach had been unbeatable, and Cif smelled not so nice as one could have been expected to be well. Eventually I did succeed. Bathroom is clean and after about 5 times repeating 'World of Fantasy' I found myself with Flesenburger Pilsener to be opened right now, as an award.

Uploaded by toucanmusic on November 14, 2011